This novel is a very intimate look at someone’s mental illness, which could in itself drive the reader into a depressed state if it weren’t for the scintillating prose which is a times laugh-out-loud funny. Martha Friel is turning forty at the beginning of the book, her marriage crumbling around her, as she looks back at her life to pinpoint the moments of significance to try and make sense of it all.

She is the child of eccentric parents. Her mother is a sculptor of minor significance who drinks a lot and drives her father, a poet who cannot quite bring himself to publish a long awaited collection, to leave them. You could say the apple doesn’t fall far from the tree when you look at Martha and her mother, who is difficult and at times cruel. But her father always returns, shutting himself away in his study among his books and poetic thoughts. Martha has a sister, Ingrid, who manages to lead a more balanced life, marrying Hamish and producing unplanned-for children with alarming regularity.

Then there is Aunt Winsome and Uncle Rowland who live in Belgravia and have funded Martha’s parents’ house and the girls’ schooling because being an unpublished poet and a sculptor of minor significance is no way to support a family. There are cousins, Nicholas, Oliver and Jessamine, as well as Oliver’s friend Patrick who’s father lives in Hong Kong and who has nowhere else to go at Christmas. As well as the closeness between the two sisters, much of the story is that of Patrick and Martha’s relationship.

That is what life was, and how it continued for three years after that. The ratios changing on their own, broken, completely fine, a holiday, a leaking pipe, new sheets, happy birthday, a technician between nine and three, a bird flew into the window, I want to die, please, I can’t breathe, I think it’s a lunch thing, I love you, I can’t do this any more, both of us thinking it would be like this forever.

Martha’s terrible rages, her problems with sounding normal at work or at parties, her unreliability, her snarky remarks, make her difficult to get on with and yet she inspires great affection from those who make the effort. She’s smart and shows odd moments of empathy.

The reason I had gone to London was for Peregrine’s funeral.
He had fallen down the central staircase at the Wallace Collection and died when he struck his head on a marble newel post at the bottom. One of his daughters gave the eulogy and looked earnest when she said it was exactly how he would have wanted to go. I wept, realising how much I loved him, that he was my truest friend, and that his daughter was right. If it hadn’t been him, Peregrine would have been acutely jealous of anyone who got to die dramatically, in public, surrounded by gilt furniture.

And while we get to see what Martha’s unspecified condition looks like, and the difficulties of getting appropriate medical help, the novel also gives thought to what makes people happy, the simple things often that people take for granted. Maybe it’s only when life is at its darkest, that you get to really understand this. I loved the characters in particular. Martha’s family are individually either odd or difficult, but they are all interesting and have their redeeming points. Patrick has his own sorrows – his lack of family, his struggles with his problematic love for Martha.

Meg Mason writes with such flair and understanding I surprised myself with how much I enjoyed Sorrow and Bliss. It is one of those funny/sad books, which can be entertaining and profound in equal measure. Mason is a New Zealand born author who lives in Sydney and this is her first book published in Britain. It is easily one my favourite reads for the year and really deserves its five out five from me.

Such a treat to discover a Sue Gee novel I hadn’t read. At first glance Reading in Bed looks like a chick lit novel (it has that kind of cover), perhaps aimed at readers not dissimilar to the two main characters: Dido and Georgia, old friends now just hitting their sixties. We meet them on the way home from a week-long literary festival in Hay.

Georgia lives in London and a year or so ago lost her husband to cancer. She still misses Henry immensely, and is just a bit jealous of Dido whose husband Jeffrey is fit, still cycling to work – he’s an academic at a university in York. Then there are Dido’s children: Kate is a doctor married to fellow medic, Leo, and the pair have produced two adored grandchildren; Nick is a history lecturer doing a PhD with long-term partner, Paula, also an academic. A family of achievers, no less.

By comparison, Georgia’s unmarried daughter Chloe is dyslexic, having struggled at school and now works on photographic shoots as a ‘stylist’, whatever that means. Chloe’s track-record with men is disastrous, one heart-breaker after another, and having hit thirty-one, is still single and not very well off.

This is where the book gets interesting. Chloe is bright and really good at what she does, but she comes across as lightweight compared to her parents and their friends who all met at university. As you might imagine, Chloe finds her mother demanding and at times interfering. And then there’s Henry’s batty old cousin, Maud, going to rack and ruin in a crumbling farmhouse with only an old dog for company. Poor Georgia has to look out for her as well.

But back in York, things aren’t going so well for Dido either: she worries about Nick – can he really be happy with the acerbic Paula whose offhand comments can so destroy the mood at family dinners? And why is Jeffrey so reluctant to come up to bed each evening, puddling in the study over his computer? Then there are Dido’s dizzy spells.

Sue Gee sets these various plot threads in motion to create a rich story around the workings of friendship, marriage, retirement and being accepted for who you are, no matter what – even batty Maud. The characters each have a lot to learn before the last page, and Gee carries the reader along with them nicely, creating empathy, even when they mess up, sometimes badly. She does this by getting inside their heads, the style adapting to each character’s way of thinking, though probably it was Chloe whose head I liked best.

The story puts everyone through a tough time of it, but the pleasantly optimistic ending will have you cheering. Bookworms will enjoy the references to literature, Henry, a civil servant, still kept his intellectual game up with his reading and was particularly fond of Dovstoyevsky, while T S Eliot and Gorky also get a look in. It’s much more than the chick lit cover would suggest, but then this is Sue Gee after all. Anyone who enjoys the fiction of authors like Joanna Trollope or Patrick Gale will relish this. A four and a half star read from me.

What You Need to Know About This Book:

The lists vary from poignant to wry to very funny, and capture the randomness of Dan’s thoughts, e.g.:

What’s Great About This Book:

I can’t help but congratulate the author on his ability to bring together humour, quirky characters, escalating tension and, of course, lists to tell a great story. A four star read from me.

Does anyone write about the human condition with as much heart as William Nicholson? Reading his novels always gives me the impression that he loves his characters as if they were family. He brings us their stories, but also their frailties and dreams, as if he’s been through exactly what they’re going through himself. Often set against an interesting background of political or social upheaval.

In the case of Motherland we start off in the middle of World War II. It’s 1942, and three characters meet and fall in love. Unfortunately, both Larry and Ed fall for Kitty when they meet her in Sussex. She’s an ATS driver, a job she enjoys, while Ed’s a Royal Marine commando and Larry, who’d rather be painting, is a liaison officer with Combined Ops under Mountbatten. Ed and Larry both went to the same school and are each other’s oldest friends, which makes this love triangle even harder to navigate.

Kitty chooses Ed, who is dashing and exciting, but also has a darkness to his nature, probably a problem with depression. Meanwhile Mountbatten and his team are planning a raid on Dieppe, using the commandos and the Canadian Infantry stationed nearby. Larry begs to go, even though he doesn’t have to fight, and he and Ed are caught up in one of the worst military disasters of the war. Thousands of casualties, and while Ed is made a hero, an accolade he loathes, Larry has to come to terms with his lack of bravery in the heat of battle.

The effects of Dieppe on all three, but particularly Ed and Larry, resonate through the book, as each settles into life post-war. Ed struggles to find a vocation and Kitty has to give up work, expected to devote her life to husband and child. Larry tries to make a go of painting, at the risk of disappointing his father who wants him to join the family banana importing company, which had made their fortune.

Mostly the book seems to be Larry’s story. We are with him as he witnesses the effects of the partition of India in 1947 (he briefly joins Mountbatten’s lot again), and later, the exploitation of workers in Jamaican banana enterprises. We have a window into his heart and his abiding love for Kitty, but also onto some of the big events of the 1940s. There’s a collection of supporting characters who each are well-rounded and have their own issues: Kitty’s ATS friend Louise who has never had as much luck with men as Kitty and decides to marry the owner of the estate where the troops are stationed – ineffectual but kind-hearted George. There’re the women in Larry’s life who just aren’t Kitty. Each gives us a glimpse of the narrow roles men and women played in mid 20th century society, and the problems entailed in wanting something else.

Motherland has characters that appear in other books by Nicholson, such as Ed and Kitty’s daughter Pamela who is a protagonist in Reckless, set against a backdrop of 1960s London and the Profumo Affair, while news of the Cuban Missile Crisis has everyone on edge. Another great read and evidence that Williamson loves his characters enough to give them more books. I’m happy with that. Motherland is a three-and-a-half-out-of-five read from me. 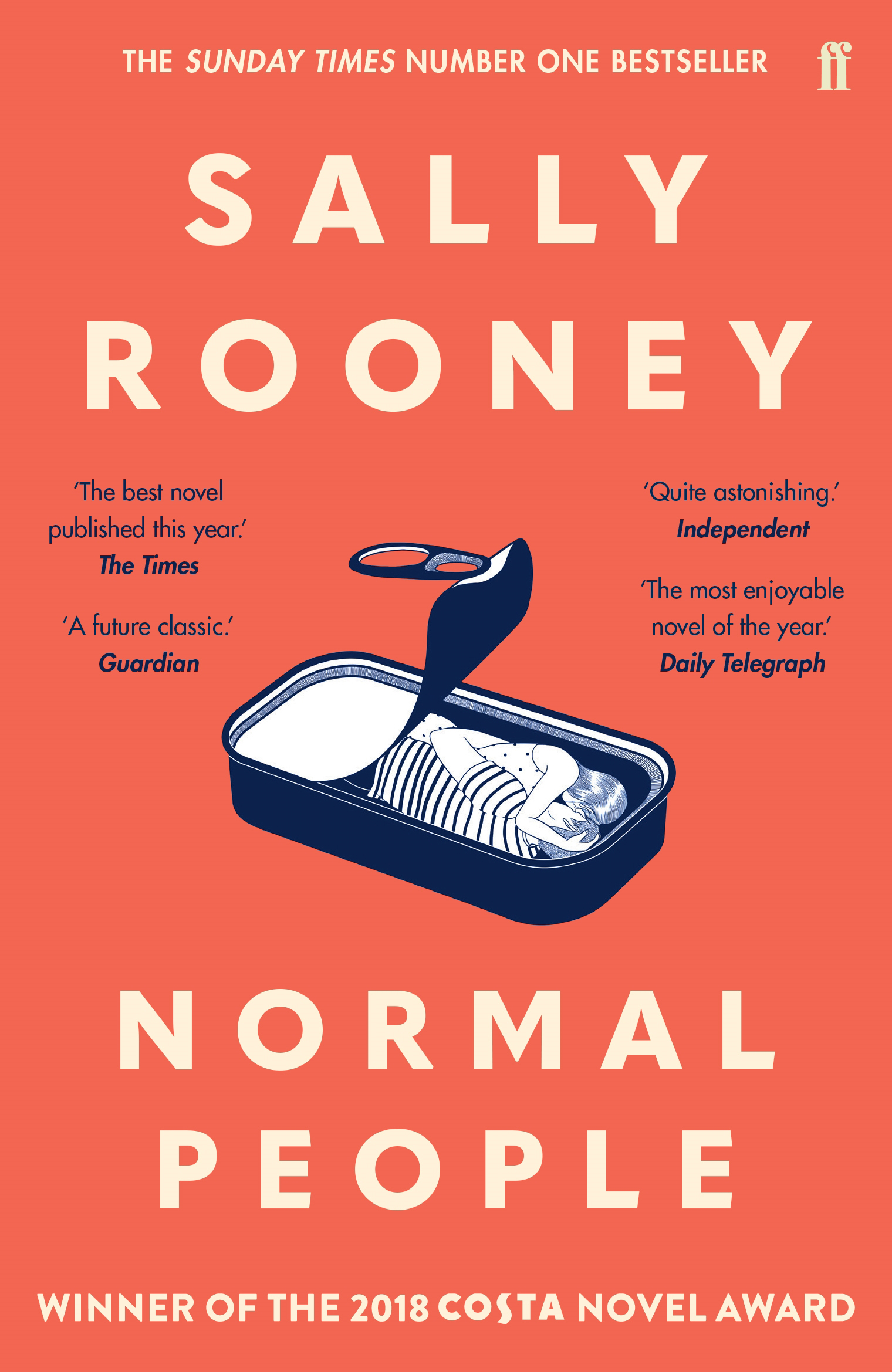 Normal People won the last Costa Award, as well as being long-listed for the Man Booker and the Woman’s Prize for Fiction. So I knew it would be good. And it is in many ways. The novel concerns Connell and Marianne, two young people who at the outset of the novel are in the same year at school. They kind of click even though Marianne’s family are wealthy and Connell’s mother cleans their house.

The story follows their on and off again relationship over their last year at high school and through university – they both go to Trinity College in Dublin. What gives the book its dramatic tension is that both characters are damaged – Connell being the kid from a bad family, with all the insecurities which that implies, while Marianne feels unloved, is mocked at school and suffers abuse at home. Throughout, they somehow remain friends, see other people, do a lot of soul-searching and struggle with their emotions. END_OF_DOCUMENT_TOKEN_TO_BE_REPLACED