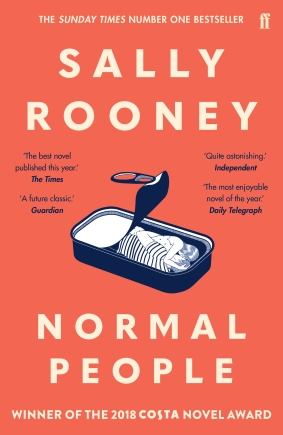 Normal People won the last Costa Award, as well as being long-listed for the Man Booker and the Woman’s Prize for Fiction. So I knew it would be good. And it is in many ways. The novel concerns Connell and Marianne, two young people who at the outset of the novel are in the same year at school. They kind of click even though Marianne’s family are wealthy and Connell’s mother cleans their house.

The story follows their on and off again relationship over their last year at high school and through university – they both go to Trinity College in Dublin. What gives the book its dramatic tension is that both characters are damaged – Connell being the kid from a bad family, with all the insecurities which that implies, while Marianne feels unloved, is mocked at school and suffers abuse at home. Throughout, they somehow remain friends, see other people, do a lot of soul-searching and struggle with their emotions.

Rooney is brilliant at getting into her characters’ heads and dissecting their complex emotions regarding self-worth, love and other issues to do with Connell and Marianne’s relationship. But I kind of wanted more – more characters, more things happening, a bit more drama, maybe. Something. It was all a little bit claustrophobic. It reminded me of the kinds of books I used to read when I was in my twenties – the earlier books by Margaret Drabble, for instance. Rooney is twenty-eight. So I know if I was thirty years younger, I probably would have loved this.

As it is, I can see why Normal People may have won the Costa. It just isn’t quite the right book for me. Three and a half out of five.