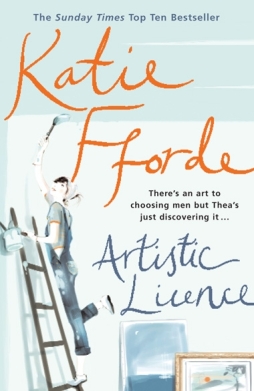 When my aunt died and we all met back at her house following the memorial service, of course, I prowled her bookshelves. She had quite a collection, having been for many years a speech and remedial reading teacher. In her living room were all the classics, in smart hard-cover editions, and I have no doubt she’d read them all, often. But in her bedroom was a whole shelf of Nora Roberts and another of Katie Fforde.

Now I have never been able to get into Nora Roberts, even if she is one of the world’s best selling authors. But the Katie Ffordes looked inviting with their pretty covers and whimsical titles so I always meant to read one.

Recently I picked up Artistic Licence, which is about thirty-something Thea, a former photo-journalist. A bad experience with her ex had sent her off to the Cotswolds, where she finds a part-time job in a one-hour photo shop and takes in student lodgers. She’s in a bit of a rut, when Molly, her bossy friend, whisks her off on an artists’ retreat in Provence where she meets gorgeous young painter, Rory.

Rory invites Thea to his remote cottage in Ireland, and she probably wouldn’t have planned a visit, if her lodgers hadn’t had a party while she was away and made a terrible mess. So of course, she abandons all and flits off to Ireland. What transpires is not the affair we might have expected, but a revelation. Rory’s stash of paintings are so good, Thea decides to start an art gallery.

The story then follows Thea’s attempts to come to grips with her feelings for Rory, as well as Ben, a distant but helpful uncle to one of her lodgers. There’s also the business of setting up as an art dealer when you don’t know anything about it – so a huge learning curve for Thea. There are a bunch of problems along the way to ramp up the tension and in the middle of it all, a dog giving birth to puppies.

I wouldn’t have mentioned the pups, except for some reason this was my favourite scene in the book. Ben turns out to be a dab-hand with dogs and all their medical needs, while feckless Rory abandons the birthing to his guests. Yes, you can see where the story will end. I saw it coming on about page three.

There was, I thought, quite a lot more wrong with Artistic Licence. First off, it was published back in 2001 and already seems a little dated. Thea is somewhat annoying, making rash decisions and never seeming able to sit still. This after having spent two years stagnating at a print shop and cleaning up after students. There are odd plot contrivances – such as when Thea accidentally forgets to take her phone to London when she has important business to conduct – and plenty of convenient coincidences. And the ending wraps everything up in such a rush of happiness on so many levels – Thea even drops a dress size.

And yet it was all oddly enjoyable. I whizzed through it and could quite happily have read another. To be fair though, this is still only a two-star read. Perhaps my next venture into Fforde’s backlist will be more satisfying.

One thought on “Book Review: Artistic Licence by Katie Fforde”