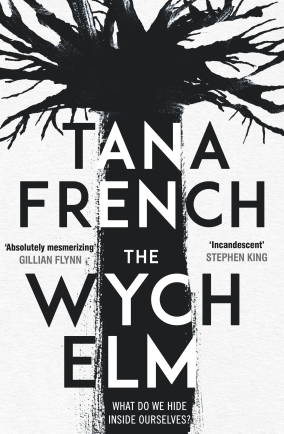 A few pages into this book, you know you are in the hands of an Irish author. It’s got that chatty, let’s sit down and tell you a story manner that you often get with Irish authors. The first-person narration also helps, but most of all it’s that rambly, discursive but hugely entertaining style of writing that draws you in and won’t let go, even when the book is five hundred pages long, and could have been around 350. Maybe.

The Wych Elm is a stand-alone crime novel, by the author of the Dublin Murder Squad series. We are in the mind of Toby, a young man in his late twenties, who is telling us how lucky he is. He’s got some family money behind him, plenty of friends, Melissa, his gorgeous girlfriend, and a terrific job doing PR for an art gallery. He’s charming and good-looking and all set for success.

Then things start to go wrong. Toby is beaten up badly when he interrupts burglars and is left clinging to life. Still, he’s lucky – he very nearly died. Leaving hospital, Toby can’t settle at his flat, so he and Melissa move in with Uncle Hugo at the old family home of his grandparents. Hugo has cancer, so needs some live-in care and Toby needs somewhere to regain his health. Ivy House is also where the family meet every Sunday for dinners – Toby’s parents, uncles and cousins – and it is on one of these occasions that a skull is discovered in the wych elm tree in the garden.

The police move in, the garden searched and a skeleton found of a young man who died ten years before. Back then, Ivy House was Toby and his cousins’ summer holiday home, while their parents travelled abroad. Their friends dropped in on them there, they had parties, studied and were given plenty of rope to enjoy themselves. The discovery of the body throws Toby and his cousins into shock as everyone tries to remember what they were doing that summer.

French has created a tense and chilling story, told largely through dialogue and the internal monologue of Toby’s slightly unhinged mind. Due to his head injury, he’s the perfect unreliable narrator, so the reader can never be sure of his innocence. His cousins, Susannah and Leon, are the same age but are more like siblings. Together, over lots of alcohol and a bit of hash, the three talk about Dominic, the dead boy, and remember what happened. But who is telling the truth and who is lying?

The police exhibit ‘the kind of meticulous politeness that everyone understands is conditional’. Interviews with CID only serve to remind Toby of his stoush with the burglars, adding to his stress. Inspector Rafferty has an easy charm that conceals a sharp intelligence and everyone is on their toes.

The novel takes a few twists and turns, as French explores the darker side of human nature and the age-old question so often the topic of mystery novels: what makes an ordinary person commit murder? She does this with originality and a subtle understanding of her characters. It all adds up to a stunning read, and a story you won’t easily forget. I even forgave her for the book’s length, because the writing is vivid, real and carefully crafted. Four out of five from me.