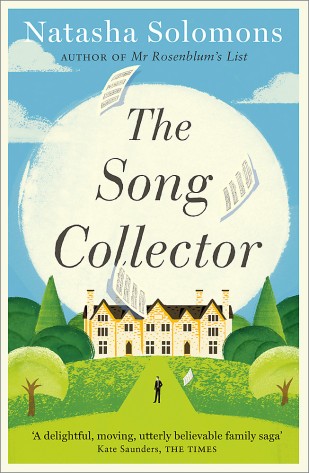 The last time I read a novel by this author, it was set in the world of art dealing and gallery exhibitions (The Gallery of Vanished Husbands). No points for guessing that this book has music as its background, the song collector of the title being Harry Fox-Talbet, a composer. The story is told over two time periods, the first just after World War Two, as Harry, his brothers, Jack and George, return with their father to the family mansion that had been requisitioned by the army for the duration.

Now they have it back it is a crumbling ruin, scarcely worth restoring. His older siblings make plans for how they can keep their damaged home, much against their father’s wishes. Meanwhile Harry visits cottages and pubs, asking people to sing old folk songs so he can write them down, and steadily falls in love with Edie Rose, Jack’s girlfriend. Edie is a famous singer, the songbird who helped keep people’s chins up as the bombs fell and the world went mad. It was hard not to hear Vera Lynn’s ‘We’ll meet again’ in my mind, which may not be quite what the author intended. END_OF_DOCUMENT_TOKEN_TO_BE_REPLACED