Some authors you read for the story, and others you don’t care so much what the story is, you just love them for the writing. Anne Enright falls into the latter category, and this is probably why she’s won awards and has been reported in the Sunday Times as ‘One of the most significant writers of her generation.’ She’s kind of literary then.

So I was mad keen to grab her new book, Actress, as soon as it came my way. There are a lot of minor characters in the book adding a cast of theatre and film people, but mainly it’s about Nora FitzMaurice, now in her sixties, looking back at her relationship with her mother, the celebrated actress of stage and screen, Katherine O’Dell. The book wonderfully conjures up the world of drama, film producers, agents and artistes of various kinds seen from the point of view of the young, fatherless girl who watches from the wings.

It’s not a happy story. Katherine is soon revealed has having descended into some kind of madness, peaking with her shooting a producer in the foot, before dying well before old age, her career having died long before. Nora is also a little adrift – emerging from her teens somewhat promiscuous and beginning to wonder who her father might have been. In the background we have a glimpse of the Troubles – a chunk is set in Dublin in the 1970s – and there’s plenty of that dry kind of Irish wit which is at its best when it is self-aware. This is particularly so with Enright.

The play may have been about homosexuality, or heterosexuality, or it may just have been about loneliness. It was certainly about a young curate who flees, after a difficult day, from the kindness of a busty, frilly-bloused, female parishioner. The role was played by an Englishman because, rumour had it, no Irish actor would take it on.

For much of the novel, I was reading thinking this is just a bunch of interesting aspects about the famous actress – her growing up with her theatre parents, her time in America, her marriage – balanced with Nora’s delving into her mother’s life, revelations of her own affairs and eventual settling down. How Nora has to step up and be the parent when her mother goes mad and during her final illness, the quirks of their relationship.

I laid the carton on the table, very casually, and she pretended, very casually, that they were not there. I am ashamed to say that I enjoyed it a little. Two hundred fags sitting between us, a blue oblong of desire.

Then about three quarters of the way in there was suddenly a pivotal moment and the story, the structure and everything else came together and it occurred to me that I’d been distracted by the smart writing and intriguing anecdotes. I had failed to notice the big things happening – the way fame and beauty and talent can be gobbled up mercilessly by the less-than-scrupulous with ruinous effect. And that what everyone really wants is just to be loved – I wonder if that isn’t what Enright’s books aren’t aways about one way or another. And so beautifully told in a way that’s very real and personal but universal too. Just perfect. So it has to be a five out of five from me. 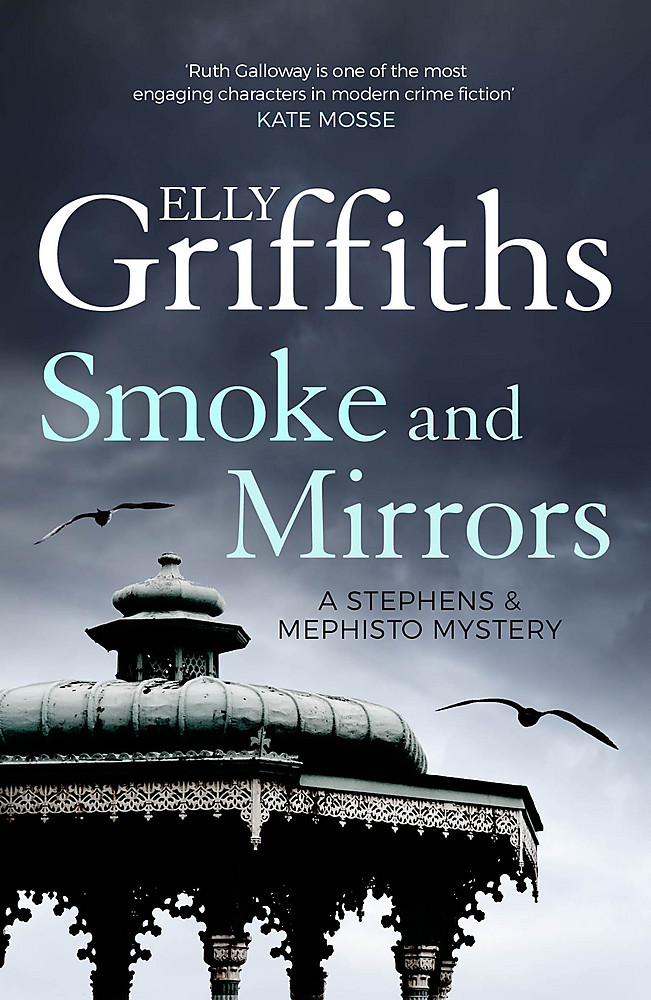 Smoke and Mirrors is the second novel in Griffiths’ Stephens and Mephisto mystery series. I’ve read all her books in the Ruth Galloway / DI Nelson series and I enjoy them for their wit, great characterisation and intelligent plotting. But what I love about them is the archaeological background she brings into each story and the Norfolk history and prehistory that bubbles through.

I guess I shouldn’t be surprised by how much I enjoyed Smoke and Mirrors for once again, you’ve got the characterisation and an engaging plot to draw you in. Instead of Norfolk and archaeology, you’ve got 1950s Brighton, it’s just before Christmas and there’s a pantomime on at the Pavillion, when two small children go missing.

Leading the investigation is DI Edgar Stephens, only thirty-one and quickly promoted to this role because of the effects of the war on the police workforce. This causes some resentment from his boss, and means he has a lot to prove. He’s also smart, well-educated and reasonably cultured. Interesting, in other words. He’s got a team of two sergeants who couldn’t be more different, and who should be starring in Alladin at the Pavillion but his old mate Mephisto.

Why you should read it: