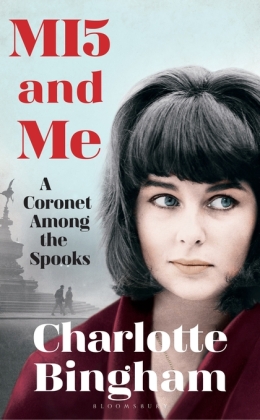 If it was in any way possible to cross a novel by John Le Carré with one by Nancy Mitford, it might turn out a bit like this. MI5 and Me is an account of the author’s time working in the typing pool in the British secret service during the 1950s.

Bingham’s father (also the inspiration for Le Carré’s Smiley) was a distant man who didn’t talk about his work at home. When his daughter shows no talent for making anything of her life, he finds her a job at MI5 where he holds a senior position. At the time, the bureau is mostly concerned with communism, spying on what seem to be perfectly harmless people, breaking into their homes and planting bugs in their telephones. As well as creating endless paperwork – hence the typing pool.

What makes this such a fun read is the absurd nature of MI5 enterprises. Mr Bingham hatches a plan to recruit a couple of actors to help flush out Communist sympathisers, lodging them in the family home, with show tunes around the piano in the evenings. Mrs Bingham puts up with music she despises and the want of a social life while having to placate staff who find themselves taking messages from theatrical agents at all hours of the day.

Meanwhile, Lottie works for The Dragon, hardly daring to imagine her work will be found satisfactory, and causing a rumpus when she pastes pictures of movie stars on the filing cabinets. The characters she works with are hilarious too. She makes friends with cooly savvy, Arabella whose beautiful mother has a string of boyfriends and receives mysterious phone calls about fish. Lottie’s next boss, Ex-Navy Commander Steerforth, struggles to find his feet in the world of espionage but is cheered by Lottie’s ability to choose such excellent cakes.

As Lottie settles in, she finds she has an imaginative gift perfect for devising strategies that are oddly successful and manages to please even her father. Perhaps this is the same gift which helped turn Charlotte Bingham into a successful author of thirty-three novels – yes, that Charlotte Bingham! This memoir has the plot structure and characterisation you’d expect of an accomplished novelist so it reads like a dream. Four out of five from me.