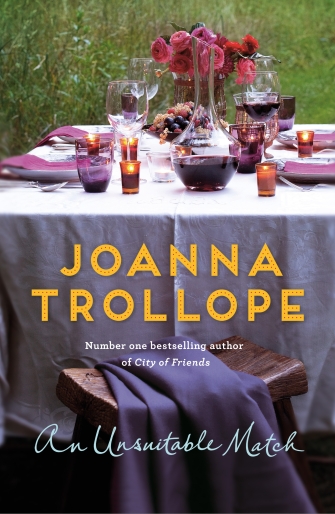 Trollope’s latest novel begins where many stories end – with a proposal of marriage. Rose and Tyler have fallen in love in their sixties, and within a few short months recognise that in spite of previous marriages for both of them, they’ve never felt like this before. The problems begin when they tell their children they plan to marry.

Rose has an elder daughter, busy mum and doctor, Laura, who at first supports her mother’s decision – it’s her life, after all. But twins, Nat and Emmy are appalled. Their reaction is emotional and soon legal advice and prenups are being talked about. Then there’s Mallory, Tyler’s American actress daughter, who is enjoying having her father around for once, but now it looks like he’s going to abandon her again, to live in England. No wonder she finds it difficult to answer his calls.

For a while reading this book, I thought some of the characters were a bit daft. They were making a fuss, as they often do in Trollope’s novels, when they had no need to. But then when I actually thought about it and put myself in their shoes, I began to understand. And this is what Trollope does so well. She gets inside her character’s heads when things aren’t going smoothly, jostling them out of their complacency and makes them over-react, behave badly and then eventually learn something.

This isn’t a novel that will keep you up at night, turning the pages to see what happens. But the writing is bliss – crisp and natural, and laced with wit. I always enjoy the settings – London and its cafés and bars, well-considered interiors, the gardens. Trollope even does small children really well, e.g., Laura’s four-year-old Jack who won’t go to sleep and asks awkward questions. Other plot threads emerge, for instance around the twins, who because they are so close to each other find it difficult to have a long-term relationship with anyone else. Fate catches up with each of them in surprising ways.

Joanna Trollope is always up to date with current fads and preoccupations which makes her consistently relevant. I generally feel when I pick up a Trollope novel, that I’m in safe hands. An Unsuitable Match was no exception. Four out of five from me.