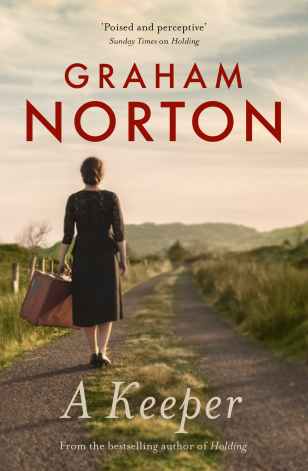 I’ve had numerous recommendations to read A Keeper, the much talked about second novel by Graham Norton. And the premise of the story is interesting enough to make you want to pick it up too. Elizabeth is a divorced academic living in her New York apartment with a teenage son when her mother dies suddenly in Ireland. Elizabeth must fly back to where she grew up, not very happily, to sort out her mother’s estate.

In the old family house that is now hers, Elizabeth finds a bundle of love letters written by the father she never knew. A surprise inheritance sends her to a remote farmhouse by a ruined castle – was this where Elizabeth was born? The story switches between Elizabeth’s search for clues and her mother Patricia’s story.

Patricia was the dutiful daughter who gave up her freedom to care for her invalid mother. When at last her ma dies, Patricia, still single and over thirty, embarks on a plan to find love and answers a letter in the lonely hearts column of a farmer’s gazette. Edward is the only possible contender – Irish farmers could learn a lot from Edward about how to write a letter to a potential love interest. Patricia takes the long train journey to visit him on his farm. Edward has a car while Elizabeth hasn’t but he can’t leave the cows it seems. Edward is painfully shy but kindly; it’s his mother who’s the problem.

I barrelled through A Keeper wanting to know what happened, which is just well, as I couldn’t help but feel that the book could have done with a bit of work. The prose is a little loose at times, some of the imagery jarring and characters’ actions aren’t always terribly logical. On the other hand, this is an Irish novel, and who knows what goes on in those remoter corners of the Emerald Isle. The other problem was no matter how I tried, I couldn’t help but hear Graham Norton’s voice reading the narrative in my head. For a while, I didn’t mind, as I rather like Graham Norton on the telly, but it somewhat interrupted my connection to the characters.

The plot is full of surprises, well-paced and builds to a satisfying ending, particularly for Elizabeth. Poor Patricia’s story is more heart-rending – the things that happen in that farmhouse make your hair stand on end. Overall, I enjoyed A Keeper, and will probably pick up another book by Norton as he is very much an entertainer in more ways than one. Three out of five from me.